“You’ll never forget your first dragon” used to be the promise of Tibia, a free 2D-MMO I played as a young teenager. I spend day after day playing Tibia, training skills with friends and exploring the world and still… never got to kill a dragon.

With nostalgia rekindled by quickly burning out on WoW: Shadowlands I tried to check in my old account. Sadly, I did not only forget the password but also lost control of my email address. Tibia allows you to restore access by sending an actual letter to the registered address of the account though. I entered my parents address, waited two weeks and actually got access to my account back.

Sadly it seems to be frozen due to hackers using it :(. I had to write support to actually unblock it. 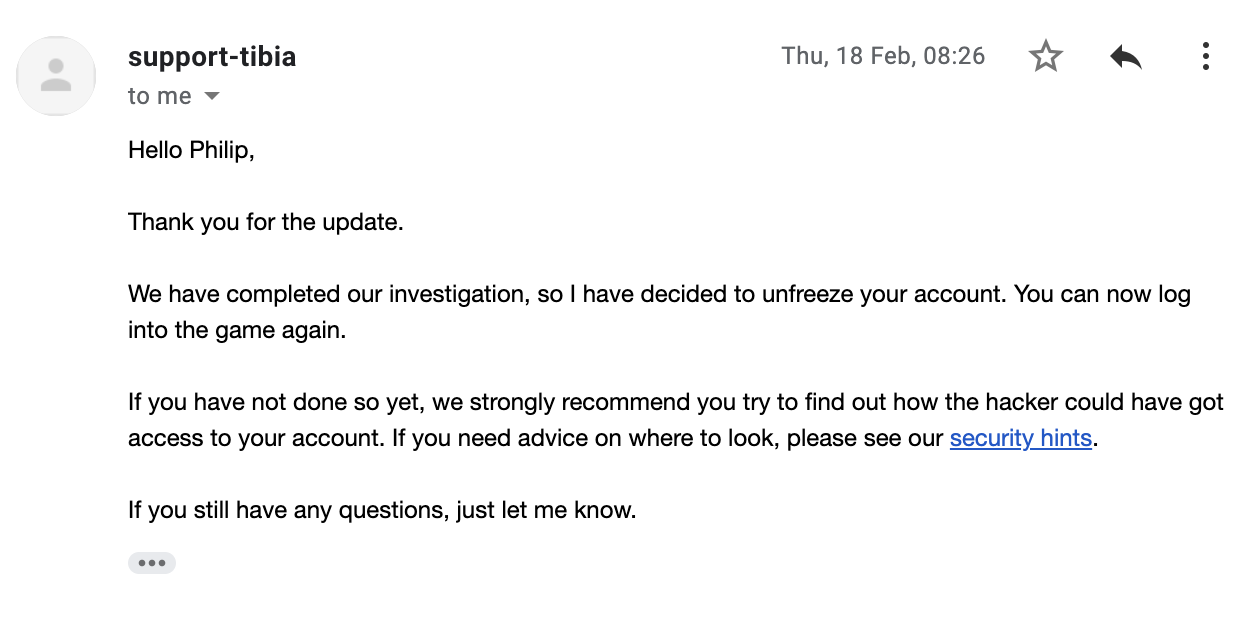 A glimmer of hope

While waiting for my account to be unblocked I went digging… The account said it was created in 2010, that is definitely too late, I remember playing as a kid/teenager and now I am old.

But I found some references still to my old Tibia life (Ranarion used to be my character name): 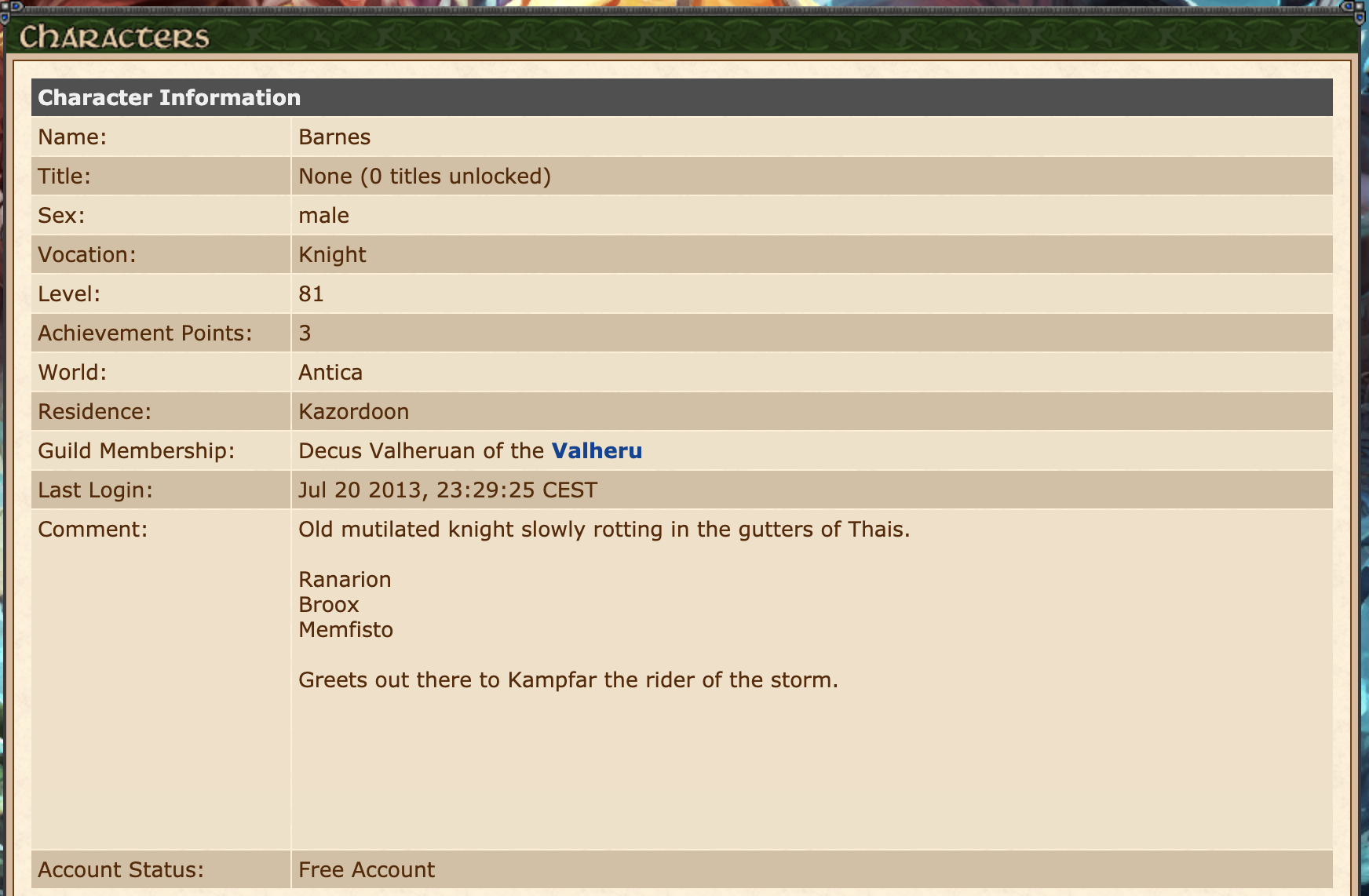 “I heard you die twice. Once when they bury you in the grave. And the second is the last time when someone mentions your name.” - Irvin D. Yalom

I used to play with a guild called Valheru on Antica. I never was a member because the minimum level required was 50 and I never made it above 18. But they took me under their wings, let me train with them and took me on some raids. It was a nice time filled with late nights trying to make my sorcerer better at shielding and 120€ internet bills.

A lot of emails and security questions later my account was officially back and I could play again. As with all modern things Tibia now has a premium account (which I bought to upgrade my character from a Sorcerer to a Master Sorcerer). 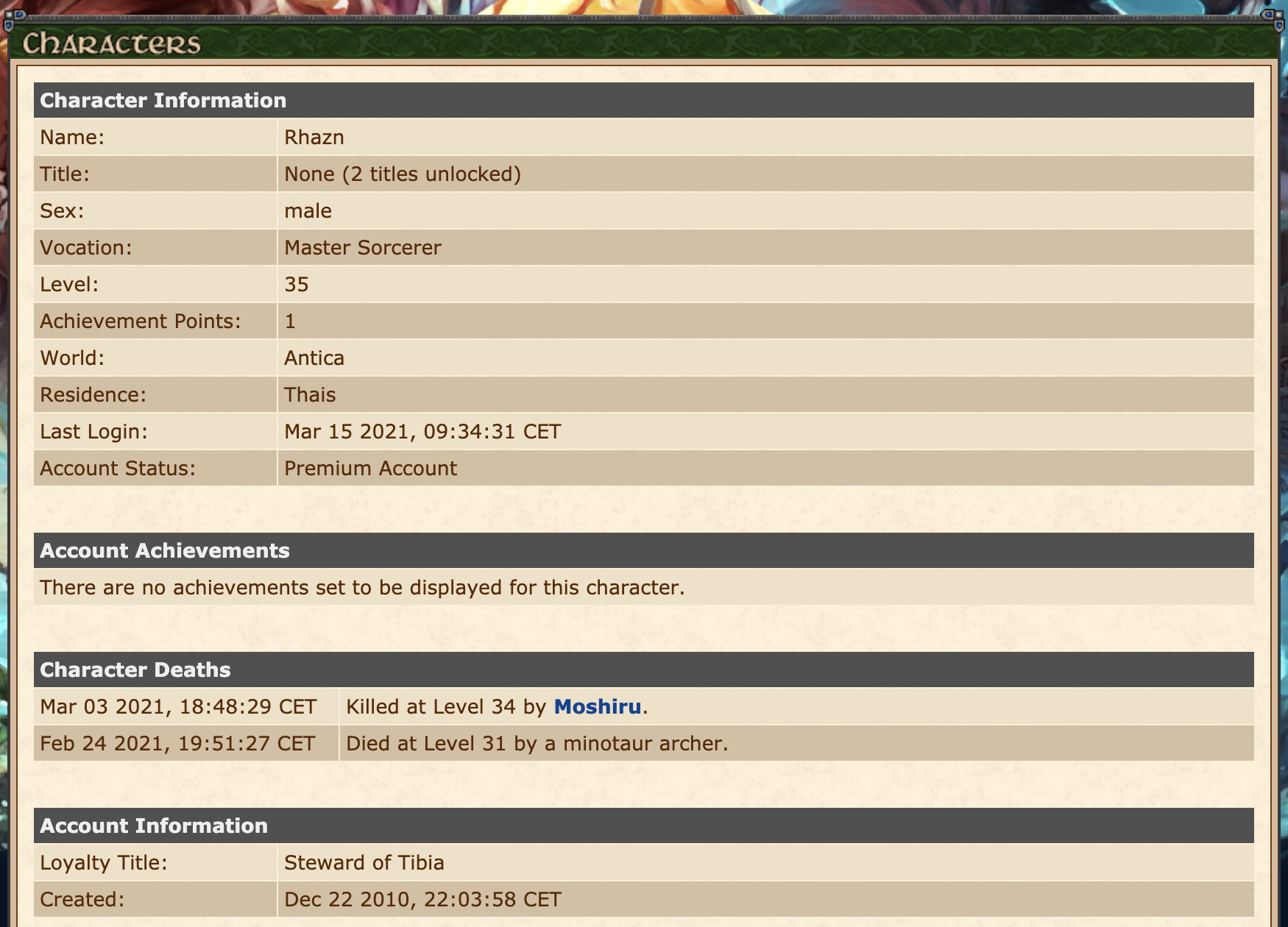 After I satisfied my nostalgia I was content to just let my premium time run out and not come back. But then I thought - could I actually find a fitting end for my 10+ year Tibia journey? What about the promise CipSoft made to me?

I asked around how and where a level 35 Master Sorcerer might be able to solo kill a dragon and found out that some of them spawn near the old dwarven city of Kazordoon. Apparently it is also very helpful to summon demon skeletons as blockers because they are immune to fire.

Armed with new knowledge, 120 mana potions and my two trusty companion skeletons I took a deep breath and entered “Kazordoon Dragon Lair”. When I saw the dragon on my radar I targeted it and ran away while spamming “Ice Strike”. 10+ years brought to a head in one moment: 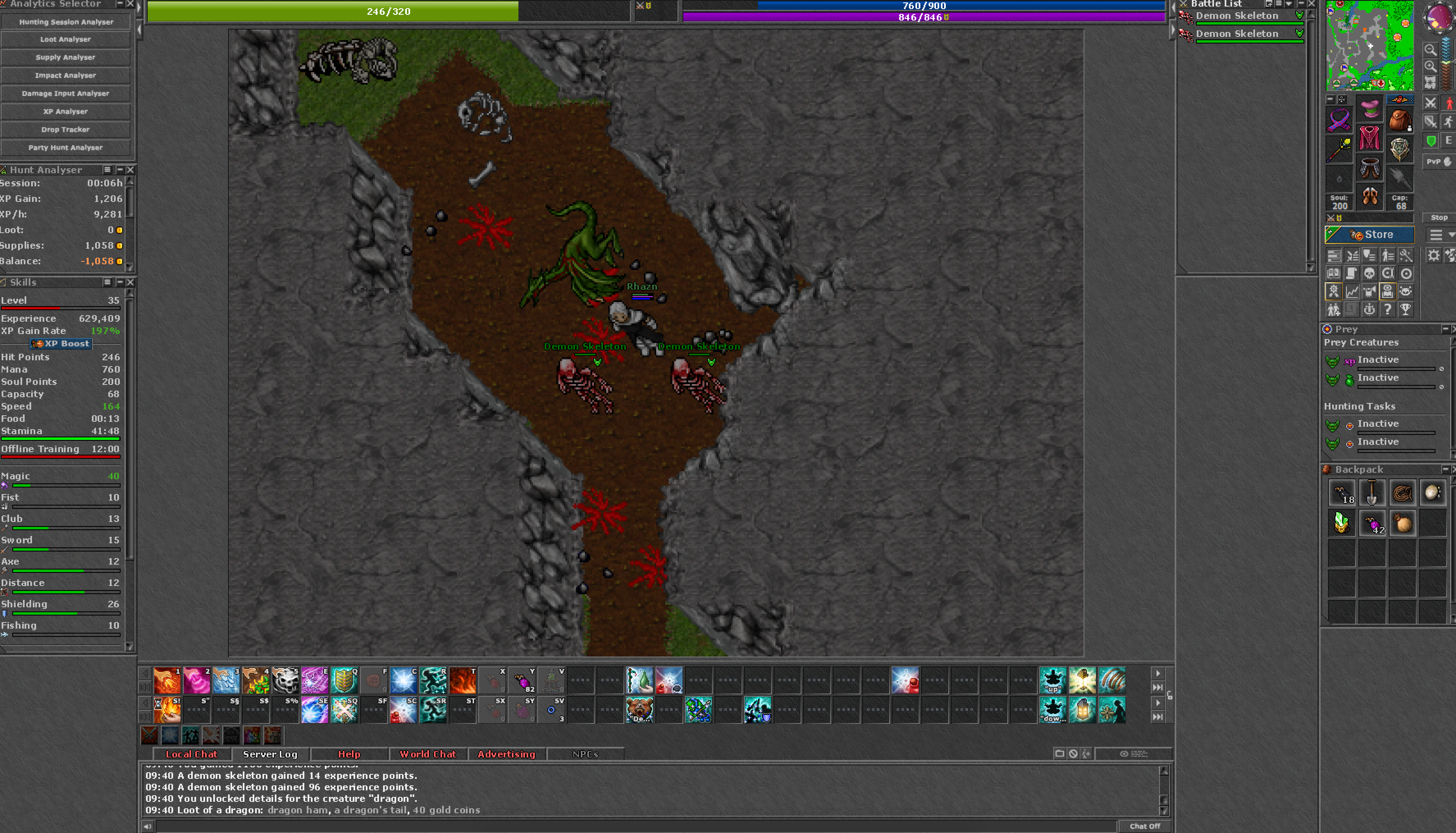 The beast is dead

The actual fight was easy and fast, my skeleton friends and ice magic slaughtered the poor dragon quickly and “Mana Shield” allowed my Sorcerer to never be in any danger.

I ran back to the main city Thais to log out somewhere but figured… why not see if the old place me and the Valheru guild used to train and life still is around?

The guildhall an officer called “Kitiara” rented was called “Halls of Adventurers”. Meeting Kitiara and advertising her tavern with a “global say” spell was what introduced me to Valheru originally so I figured it would be a fitting end.

When I reached the hall and inspected it, I saw that not only did it still exist, Kitiara was still renting it. When I tried to enter my character got immediately teleported out of course - my character was long forgotten.

I logged out one last time in front of the halls, a fitting end for my Tibia story - you never forget your first dragon. 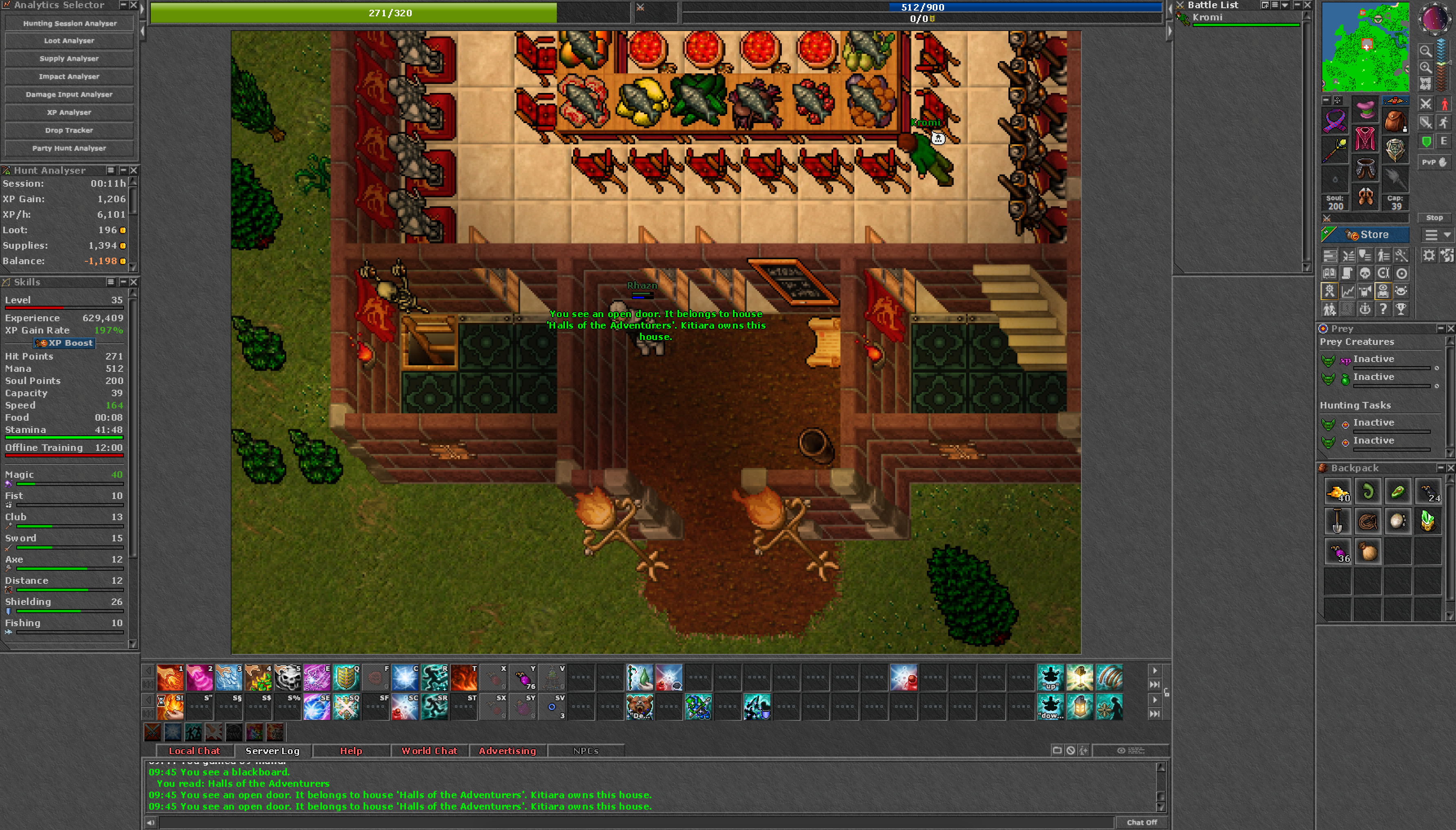 More information on my Website. I love getting emails. Talk to me philip@heltweg.org or find me at @rhanarion.